I’m not quite sure what to write today, because I’m low on sleep and high on stress, but I’ve been thinking a lot about some lore for the world of Ensign of the Week (side note: the redesign playtest material is waiting for a time when I have enough time to actually put some thought into it. It should show up sometime soon). Specifically, I’m thinking about the multitude of species present in the setting, and about some of their history.

So I thought I’d share it. In a perfect world, where I had all the time I need, I’d write it as a set of encyclopedia entries or another in-universe perspective, but today it’s simply a pile of things I thought about.

The two main intergalactic organizations in this world are the United Universe government and the Sqral government. The UU is mostly in the Milky Way galaxy, but has begun to explore other galaxies; the main species of the Milky Way are Humans (from Sol III, aka Earth), Whelin (from Proxima Centuri b, aka Whel), Suna (from Tau Ceti f, aka Trie), and Winged (from Kepler-62f, aka C’cdefg-al), although other minor species exist. The Sqral exist primarily in the Andromeda galaxy.

Specific Species and Their Cultures 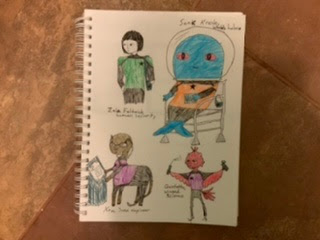 Some of the species of the universe

Humans are your standard humans. There are a wide variety of races within the human species, and an immense diversity of languages. Humans have two widely acknowledged biological sexes, and many gender identities and romantic orientations. You know humans; unless I’m wrong, you’re probably one of them.

Whelin (whay-LIN) are almost like space whales — their physiology resembles the earth blue whale if it had small arms, but their biological makeup greatly differs. Their biology is not carbon-based like the other species of the Milky Way; they are silicon-based organisms that breathe diatomic chlorine instead of diatomic oxygen. For this reason, they are always equipped with chlorine tanks when onboard a ship, and their quarters have special seals that let them sleep in a chlorine rich and aquatic environment. Because their native environment is mostly liquid (aqua regia, specifically, which serves the same purpose as water for their biology), they aren’t bipedal, but they created hoverchairs that let them handle their duties on ships equipped for multiple biologies. They have four biological sexes, two of which correspond roughly to human female and two which correspond roughly to human male, although they do not limit gender expression — most Whelin recognize 6 or more social gender identities (‘social’ meaning based in gender identity and expression rather than biological or grammatical manners).

Whelin names tend to be short, with a personal name (usually one or two syllables) followed by a family name (usually two or three syllables). There are many languages spoken on Whel, but the most common one is called K’drazon, or Trade Elin. It uses mostly hard consonants and short vowels and the apostrophe, which denotes a consonant that “says its name” or acts as a separate syllable — the name of the language is pronounced kay-drah-ZOHN; emphasis is usually on the last syllable of a word, and the sentences are put together as subject-verb-object. Trade Elin has three genders of nouns: thinking (any animal or sapient), feeling (plants, algae, all living things), and object (non sapient, non living objects).

The Suna (SOON-uh) are similar to earth myths about centaurs, although they look more like centaurs crossed with reptiles. They are a cold blooded, reptilian, hexapedal species that have large heads, an almost-human torso with the ‘active’ pair of limbs (equivalent to human hands and arms), a quadrupedal lower body, and a long prehensile tail; their entire body is covered with scales in various shades of brown, and they have perhaps at most two or three long, thick, black hairs on their head if they have any hair at all. They reproduce through egg-laying, which are then fertilized by another Suna (any individual Suna can both lay eggs and fertilize them) and sent to the nurseries to hatch. Suna are raised communally for the first 10 years of their lives, until they apprentice to an older Suna, with whom they move in for the next 5-7 years.

Suna names tend to be short (one syllable) and describe either the individual’s job or their personality (they choose their own names around the time they apprentice). Their language is called Hlar, which literally translates to “language”, and it uses mostly different short clicks and growls (many words sound similar except for the tone of voice and inflection). The sentences are most often structured as object-verb-subject. Suna link grammatical gender to distance — the general categories are touching-the-speaker, near-speaker, within-speaker-line-of-sight, out-of-sight-and-position-known, and out-of-sight-position-unknown.

The Winged (it’s pronounced wing-èd, and it was given to them because their language is very complicated) are a strange species. They are bipedal, but their arms are wings (they can fly, short distances, but usually don’t) and they are completely covered in feathers except for their eyes, mouth, and claws (on the ends of their legs and arms). Winged base social distinction on feather color — the darker the feathers are and the closer they are to what humans call violet, the higher status the Winged is. This caused some confusion when they first encountered Spacefleet, because they assumed the purple-uniformed Science/Engineering/Medical division were the leaders, which was a complicated misunderstanding to sort out.

Winged language is musical — most individuals have perfect pitch, and words and names are one syllable repeated a certain number of times to a certain sequence of musical notes. Because most non-Winged don’t have perfect pitch, most Winged use nicknames when dealing with outsiders; these are typically either words related to music or words that sound a little like their names. Unlike the Suna language, Winged language cannot be transliterated easily, and so when written down it is either in musical notation, or it is written word by word like this: C’cdefg-al C’cbc-eh (translation: the Winged name for their planet followed by the Winged name for themselves). The first part is the key of the word, followed by an apostrophe, the sequence of notes used to represent the word, a hyphen, and the syllable that is used to sing the word.

This was quite long, for a filler, and it’s coming quite late in the day, but it’s here and I hope it’s interesting. If you have any feedback or questions, please let me know!

Popular posts from this blog 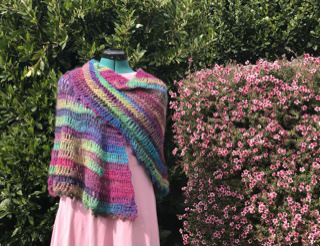 I finished this a few weeks ago, and I’m finally sharing both pictures and a free pattern for my new favorite shawl (and, hopefully, I might even be able to figure out ravelry posting)! I love shawls because they go with everything, and this one combines rainbow colors, a feathery border, and beautiful drapeiness.
Read more

February 25, 2021
I am a person of many hobbies and interests, and my space reflects this. I have books everywhere, next to balls of yarn, crochet hooks, and dice. My favorite bag usually includes the book I'm reading (if it's a paper book), one of my WIPs (works in progress, of which I have way too many), my dice bag (you never know when you'll need dice), and a handful of other things like my phone and pens.
Read more

The benefits of a nonexistent budget

April 15, 2021
I don’t have much of a budget for yarn or rpgs. In fact, most of the time, my budget is best described as nonexistent, for a handful of reasons. In addition, I have highly limited space. These two things combined mean that I rarely buy things, and if I can, I will always try to make do with what I have. However, though it may seem like a bad thing, I actually love my situation (most of the time). The budget, and the fact that the budget is not easy to stretch, has taught me a lot of lessons about myself and my crafting and gaming.
Read more 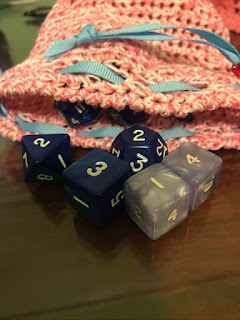 Just a buffer post today because I had side effects of my second COVID vaccine shot until yesterday, so I had to catch up on two days of work and didn’t have a chance to write. I’ll stick this on Ravelry when I have a chance. I’ve made a few of these bags as birthday gifts, hence the name. It’s a fairly simple pattern, made with two colors of Aunt Lydia’s Crochet Thread (or any other size 10 crochet thread).
Read more

Bardic Wizard
I dabble in a number of fibercrafts, but I specialize in crochet. I also love tabletop roleplaying games (TTRPGs), among many other interests. Pronouns: they/them/theirs.